The Fight To Save The American Kestrel 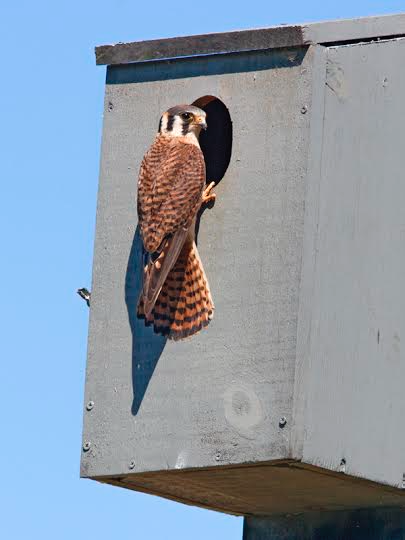 Usually the first question that comes to mind is, “What is an American Kestrel?” They are not a hawk. They are the smallest member of the falcon family in North America. In much of the Eastern United States they are a threatened species. Kestrels are a bird favoring wide open grasslands.

They are cavity nesters which means they do not build nests. They look for naturally occuring cavities in older tress or for cavities that have already been excavated by birds such as woodpeckers. Their population has declined by as much as 80% in Connecticut over the last 30 years primarily due to the loss of habitat to housing development and a lack of naturally occurring nesting cavities.

It was discovered a while back that they will use man made nestboxes that are put up in appropriate habitat. About 5 years ago Tom began experimenting with some nestboxes in the Connecticut River Valley and, after many failed attempts, began having some success with them using these nestboxes.

Tree farms are ideal kestrel habitat, which is why Dzen Farms found great interest in the bird and granting unlimited access to our properties.  In addition to their great beauty, having kestrels breeding on the farm adds a natural, biological component of pest control to our farm operation. Kestrels eat primarily insects and small rodents. Both of these can be a real problem for farmers. During this breeding season there are 6 kestrel nestboxes located on the Dzen’s properties. Of those, there are currently eggs in 3 of them.

female kestrel at a nest box ready to enter the box 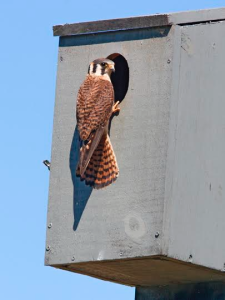 A single egg that was just laid in a nest box on one of Dzen’s Christmas tree plots. 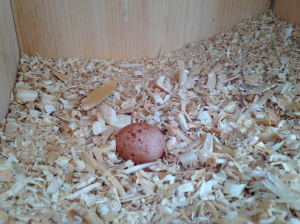 A male kestrel inside a nestbox helping to incubate 4 eggs that are in another nextbox on the Dzen farm. 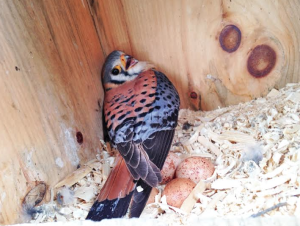 Photo of what the complete nestbox setup looks like. This one is also on one of the Dzen’s farm parcels. 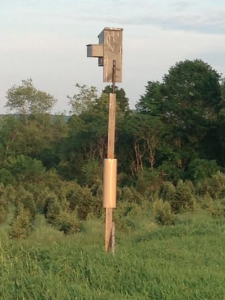 Dzen Farms is honored to work with Tom and help restore the population of this beautiful creature.  If you would like to follow Tom and his project to preserve the Northeast Connecticut Kestrel Project, head here: (www.nectkestrels.com).  Toms project consists of approximately 70 nestboxes that have been put up across a 120 square mile area in north-central Connecticut.